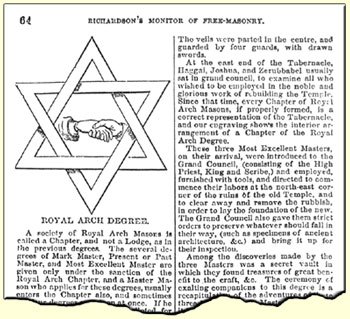 “The body of Masonry rose from the guilds of workmen

Who wandered the face of medieval Europe, but the spirit of Masonry walked

With God before the universe was spread out or the scroll of the heavens unrolled.”

To say that the history of freemasonry is a fascinating one is not enough. A few other things have caused so much admiration and controversy than this group of people who have proposed to develop primarily themselfs to become better and consequently the hole humanity. We will try to pass a very brief history of this organization.

Although the speculative freemasonry has appeared only in the 20th century and it is believed that developed in masons operative guilds from the middle ages, with its roots loses on the stream of time and can be drawn up to the schools of mysteries of antiquity. From these, Freemasonry has picked up two of it`s the most important concepts: belief in a single Supreme Being, who created man and the everything in the universe, and faith in the immortality of the soul. We see also many similarities between the rituals carried out in the Schools of mysteries and the rituals of Freemasonry. In Persia, neofitul, after a certain period of time in a cave to endure hunger and cold (conditions that will change his mentat), is taken in a room where a sword threaten his heart. From here he begin his journey through initiation and it will go through several chalenges. In Greece and in the rest of the schools the initiate was blindfolded during the ceremony his site was restored only at the end of the ritual, when he would be able to “receive the light”. In Egypt we find on the walls of one of the temples a glass which shows a lion taking the initiate`s hand and  raises him to life, a life renewed and full of light. And the examples can go on.

The period of the Middle Ages, although was represented in a large part stagnation and the fear of progress, came up with a few fundamental changes which have made possible the apparition of speculative Freemasonry. The first of these changes has been the Italian Renaissance, which involved a return to the study of classic, has aroused the interest for the deepening study of the Kabbala and tried to break free of those institutions which were the use of ignorance and superstition. Thus, markes the appearance of the universal man,who is not satisfied with what he gets from the others, but trying to enrich his own  knowledge and to expand its own universe, to exceed his limits and to be better in all fields of knowledge. This thirst for knowledge and truth, this eternal search, will be inherited by freemasonry, which encourages all its members to submit to research the entire universe. A second essential step was Martin Luther reform. By this, freemasonry was unable to issue the control of ecclesiastical heritage. Otherwise he would have become another part of the Church, like the  other guilds or certain order of knights. However, the most we owe to another event which took place in the era of  light in France: the French Revolution. In a En environment in which the man was seen only slightly higher up than an animal or a piece of meat, a being without any rights, have been the concepts of human rights, equality and fraternity, so foreign till then and both esteemed by freemasonry ever since. The middle ages represented at the same time a period in which have occurred and prospered various order of knights. The spirit of them and the set of moral law which they were promoting can be found today in freemasonry, in its rituals.

In the modern period, Freemasonry known and developed very strongly, especially in the West, once with the spread of democracy and freedom of thought and expression and continue to be involved constantly in society, especially because of the numerous difficulties and disturbances that it has. Still, freemasonry will make every effort to combat ignorance and superstition and fanaticism in order for society to thrive, and the slogan “freedom, equality, fraternity” may not represent just a empty and formal slogan. All under the guidance of the G:.A:.O:.U:!